In which I tell a dad joke.

You know how every once in a while I make something and you think to yourself, “Why in the heck did anyone make that in the first place?” and then you think “And why did she feel the need to repeat it?”.  Just remember, I’m trying some of these things out so you don’t have to. (Not that you’d really want to sometimes…)

Now before you get too excited, this recipe is not an actual failure.  It’s just another so-what recipe and I’ve been sitting on it for a while.  Let’s see what I can do to make this a lot more exciting for all of us. 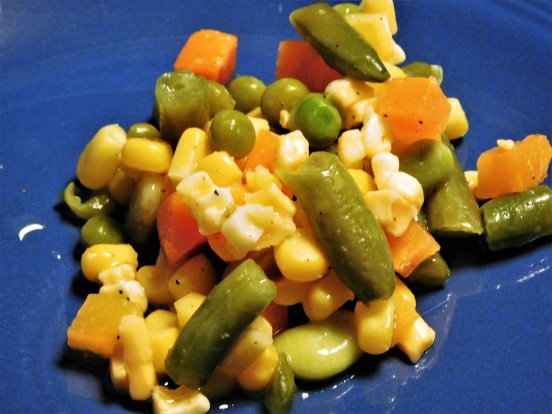 Has the potential to get really inappropriate.

This recipe, as I made it, is all sad trombones.  It may not even be as interesting as that.  It will probably nourish your body to a degree, but it will do nothing at all for your soul.  Maybe it’s good diet food?  You’ll get bored enough eating it that you’ll lose your appetite all together?  Having already tried the 4 Bean Salad, I can see how different versions of this salad could easily sing. This one is completely tone deaf. 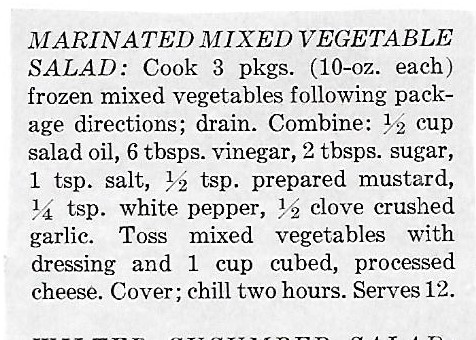 In which we have a game night with some very important people.

We had friends over for games the other night. I made great-grandma’s recipe for whiskey slush (recipe to come later).  This led into a conversation about this blog and why I started it.  I commented about making my children try all of the recipes (not whiskey slush) and how sad it is that we don’t continue to make some of the recipes, but some of the recipes, like egg foo yung, should just be left in the past.  “Why doesn’t anyone eat Hot Chicken Salad any more?”  John lamented.  Our friends turned to look at him.  “What is that? I mean, I know all of those words and what they mean, but what is hot chicken salad?”  “Is there macaroni in it?” another friend asked.  “Nope.  It’s all chicken and mayo and celery and onions and peppers all cooked up together with stuff on top.  Well, one recipe is.  I have something like 4 of them and I’ve only made two at this point.”  So in honor of my friends, old and new and a long, complicated story of friendship beginning in 1986, I present to you the first of 4 recipes of hot chicken salad. 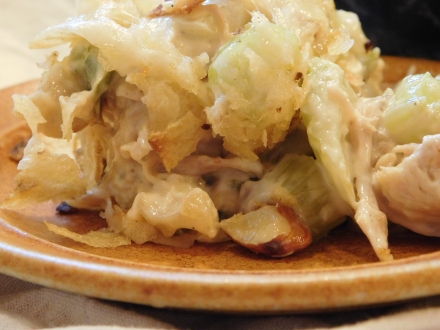 This hot chicken salad is nostalgic in flavor and presentation.  The potato chips and swiss cheese on top screams “your grandma made this.”  She probably did, depending on the age of your grandma.  This is the sort of food that would’ve been served in elementary school cafeterias while I was growing up.  It probably made its way onto the buffet table at church potlucks in towns all over America.  Diners would put this on their menu as as a daily special.  It’s like the chicken equivalent of a tuna melt. 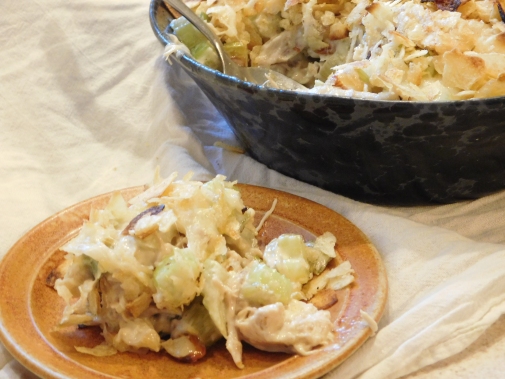 This is the innocent food of a time we think of as simpler than the times we have now.  In some ways, maybe it was.  When life gets complicated and you want to go back to grandma’s house and just forget that you have to deal with the real world, go grab a rotisserie chicken and make some hot chicken salad.  It isn’t going to help you get that promotion at work.  It won’t do your housekeeping.  It won’t pay a single one of your bills.  But it might remind you of a time when you didn’t need to worry about any of those things, either. 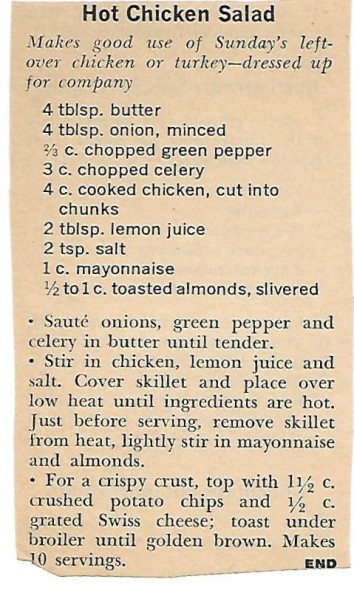 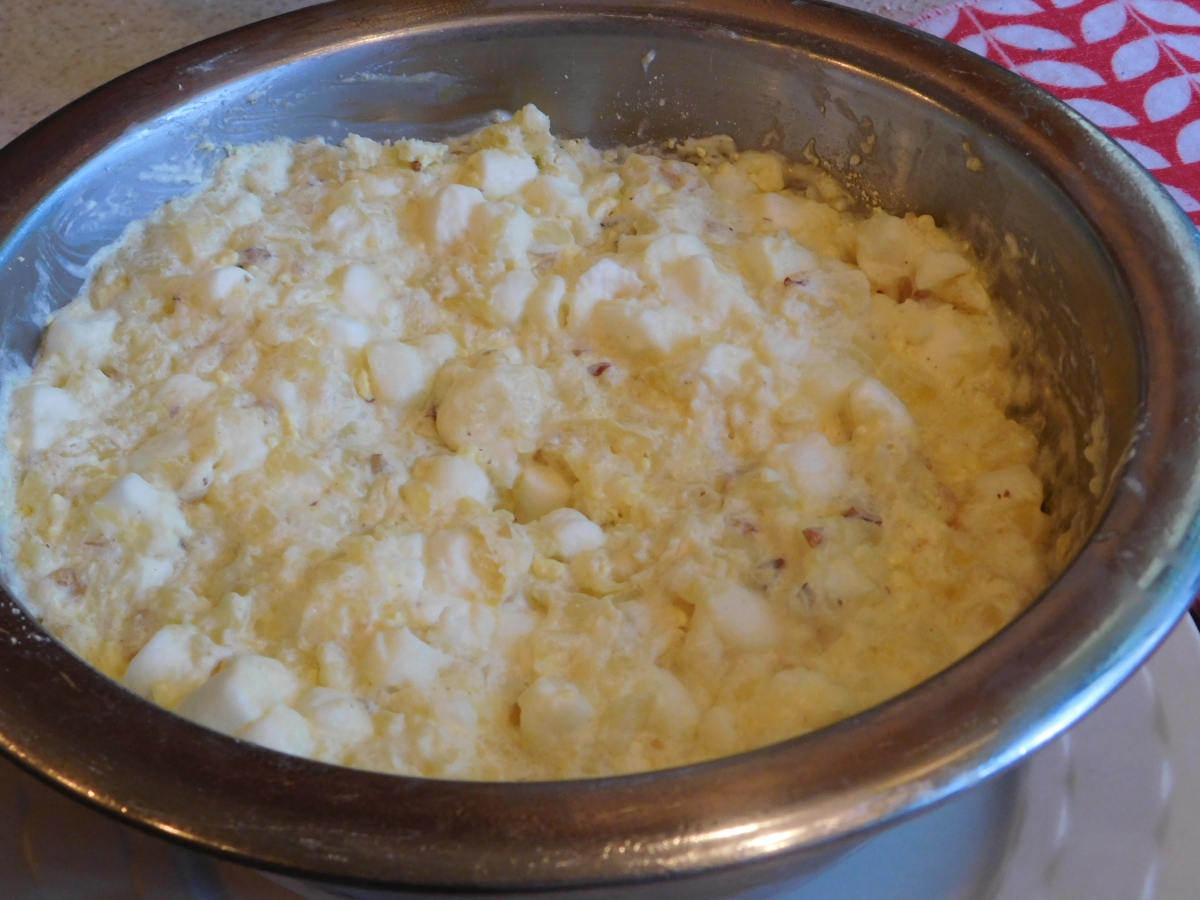 Growing up, we had these great neighbors with whom we always had fantastic potlucks.  Our neighborhood was really a fantastic place.  The 4th of July picnic involved an all-neighborhood water fight and blocking off the street.  A writer I knew even wrote about it.  I’m not sure if it’s in his published works or not, but I intend to read his books to find out.

As much fun as July 4th was, it was Thanksgivings that stick in my mind.  There were green salads with chickpeas in them.  It seemed exotic to me at the time.  (Note to self:  start doing that more again).  My mom would make sweet potato rolls.  There was enough variations of the traditional foods that it seemed like passing the food almost took longer than eating it.  The crown jewel of the meal, the thing that seemed the most impressive in that whole meal was the frozen fruit salad.  It was always done in a ring mold and had canned fruit cocktail and bananas and whipped cream and marshmallows. 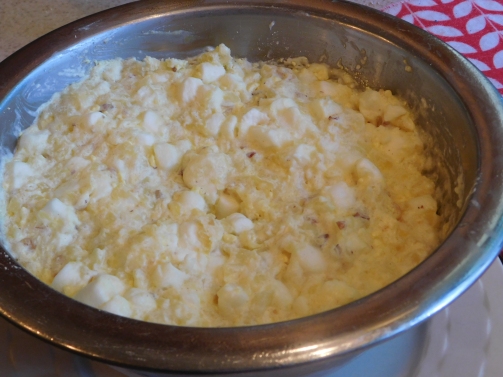 At the time, I had no idea that this version of frozen salad existed. For some reason I associate butter mints and salted peanuts with old ladies (or ladies that seemed very old when I was very young).  The addition of canned pineapple and marshmallows combined into a creamy frozen Jell-O salad solidifies that feeling.  It’s both disgusting and wonderful all at the same time.  One of those guilty pleasures.  The nuts add a bit of crunch and texture.  The mints kind of bring everything together and make it really refreshing in an unexpected way.

When I made the salad, I realized partway through my freezing that I had forgotten to add the mints.  I ran downstairs to the freezer expecting that the salad would be frozen solid and there would and I was going to have to figure out a workaround, but it turned out that when we moved the freezer, someone had plugged it back into the wrong outlet and the power strip had tripped.  This meant my salad could easily be saved.  (It hadn’t been very long, so everything else in the freezer was saved also.  Not like that other time when I suddenly had to cook 3 pounds of ground beef, some ribs and some chicken.)

When you look at the recipe, there is something written next to the word “Jell-O”.  It looks like “clay”, but is probably “cherry”, but I didn’t know, so we used lemon Jell-O.

Sorry for the lack of pictures on this post.

A word of caution, this is a dessert salad.  You can serve it along with your regular meal, but it is very sweet.

In which I attempt to hold onto summer for a minute longer. 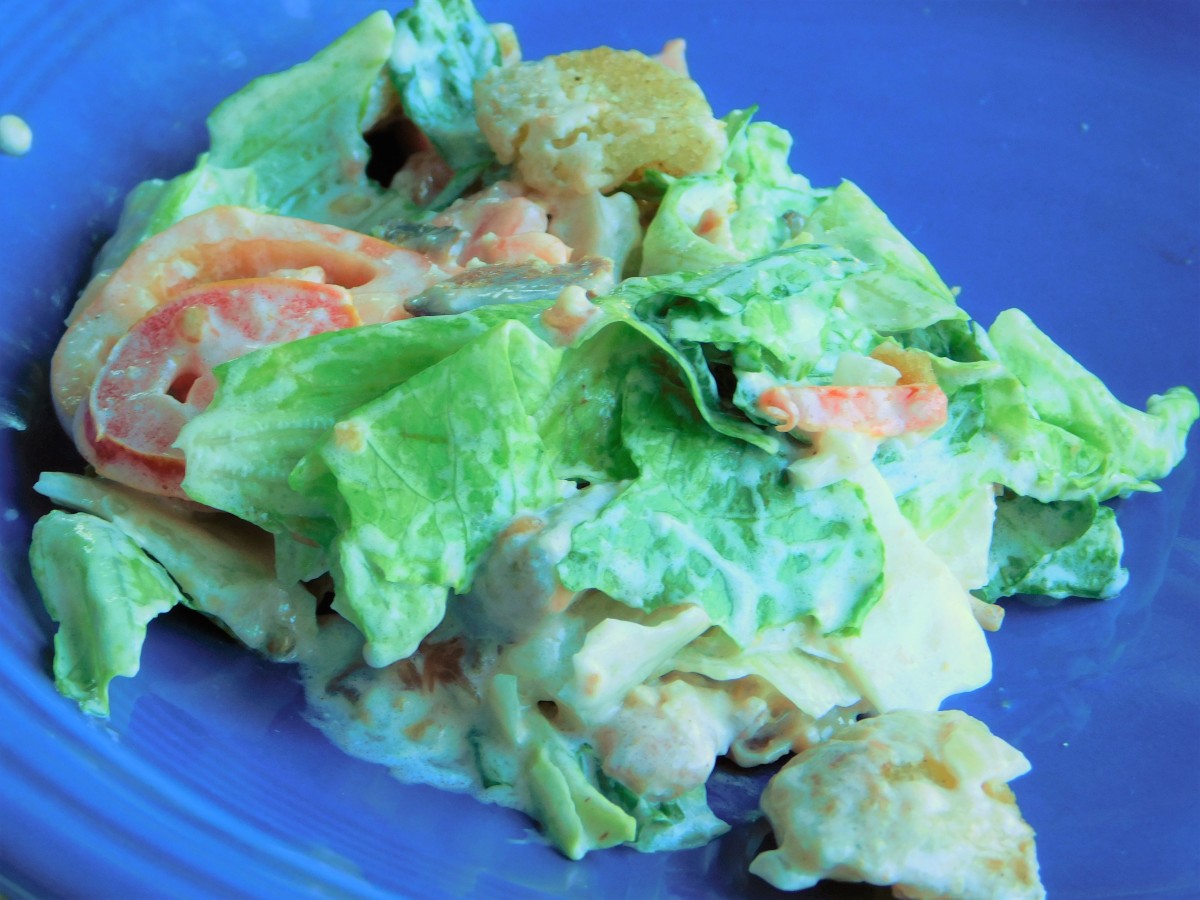 I still have a few tomatoes clinging to the vines in my garden.  There are plenty of green tomatoes that I should pick and use to make Green Tomato Mincemeat or Fried Green Tomatoes.  That might come later.  I’m clinging to the skirts of summer, pulling on the hems, begging it not to leave quite yet.  There is so much preparation that has to happen before winter and so little daylight to do it all. 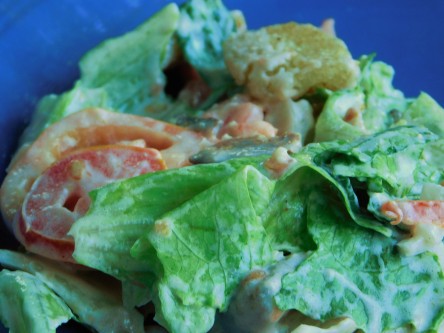 Rather than dwelling on the melancholy of passing time, I’m going to grab another ripe tomato and make this salad again.

There is a movement going on right now called “Will It Waffle?”.  In his book Daniel Shumski answers this question over and over to delicious ends. 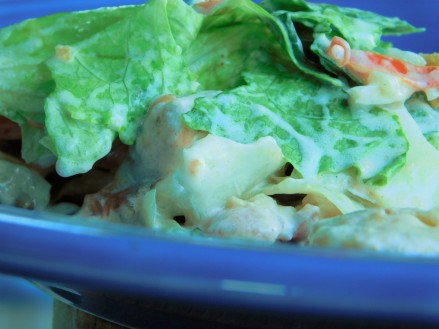 I believe this salad was created with a similar thought in mind, and probably before Mr. Shumski was even thinking about waffles.  Everyone has had BLTs.  There is that pleasure of biting into the crispy toast and having the tomato juice combine with the mayo as it drips down your hands.  Saladizing the classic sandwich gives it a bit of elegance.  You can serve it in a bowl, eat it with a knife and fork.  It instantly becomes fancy food.  It’s not just a salad, it’s a Panzanella.

Take one last bite out of summer.  Find that last red tomato and make this salad.  Fancy it up with a good loaf of Italian or French bread.  Use your favorite bacon.  Get out your fancy dishes and eat this salad. 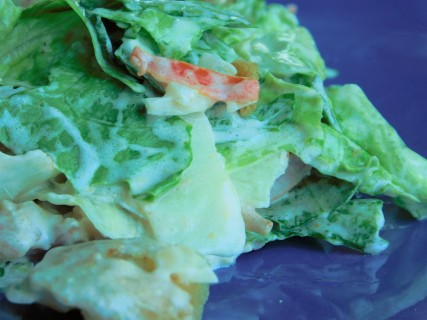 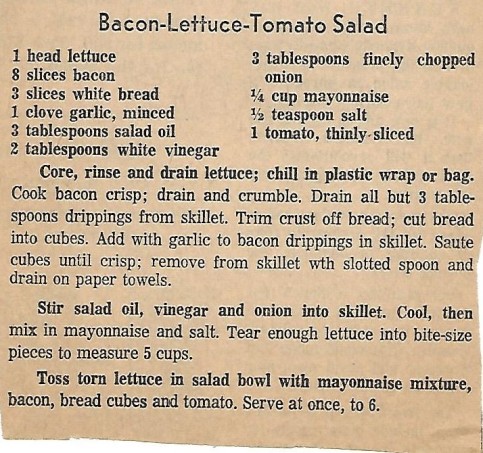 In which I try (and somewhat fail) to impress old friends. 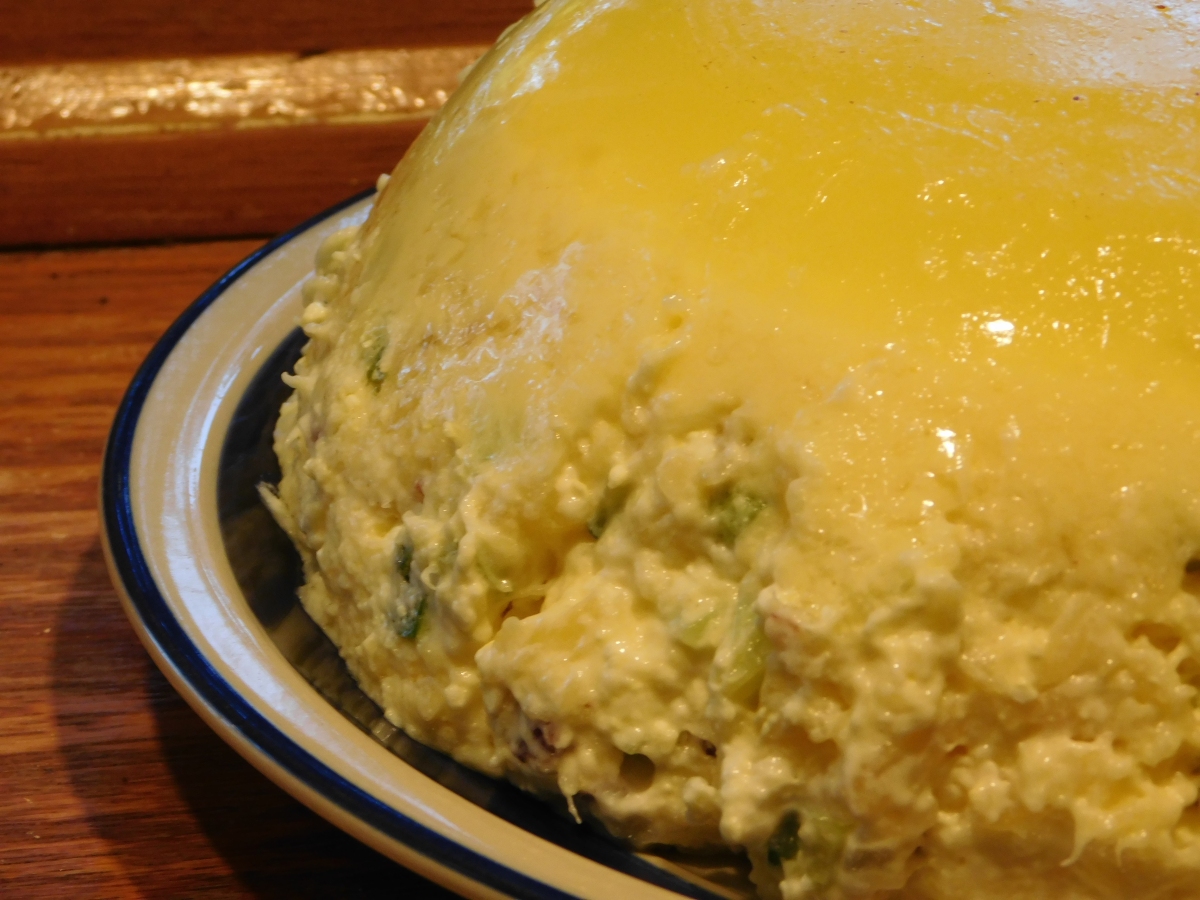 Another post with bad pictures, but I have to get rid of the backlog and I’m really not going to remake some of these so I can have better pictures.

The kids and I went to the grocery store and got a bunch of packets of Jello knowing that I would eventually need them.  I had read through recipes and just got the things that I knew were popular flavors or things that I had seen.  So in the cart went Cherry, Orange, and Lemon.

We can start to enumerate my mistakes here: 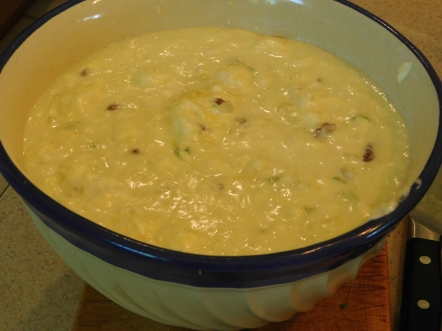 All of this is preparation for what happened next.  I had my old camp friend and her family coming over for dinner.  It was the first time she was seeing our new house, I had just started the idea for my blog and was excited about all of that.  And so I planned a menu that involved only recipes from my collection.  And what could be more representative of what I was trying to do than to make a Jell-O salad?

Looking through the ingredients I had in the house, I decided that Frosty Lime Salad sounded about perfect.  Except I didn’t have lime Jell-O.  I figured it wouldn’t matter that much if I substituted lemon.  But then I made the mistake of mentioning that I made the substitution after talking about my intention was to follow the recipes exactly as written.  And because I only had huge boxes of Jell-O, the recipe was doubled.  I might have gotten teased a bit. 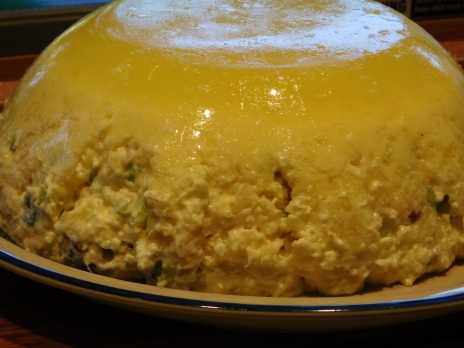 Frosty Lemon Salad is refreshing in a way you wouldn’t normally think of.  Cucumbers fresh from our garden, and celery make a nice counterpoint to the sweetness of the pineapple.  I did not serve with lettuce and cherries.  The creamy layer was a bit loose, as you can see.  No one complained that this was gross, so it must’ve been ok. (Mom just told me that it was Martin VanBuren and his set that coined the term O.K., who knew?) 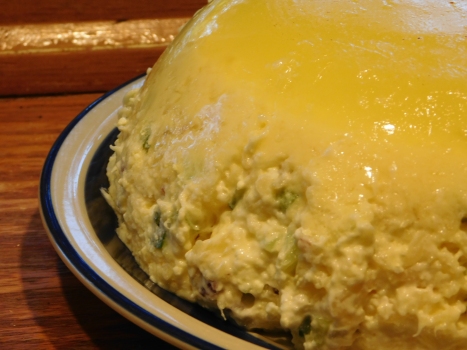 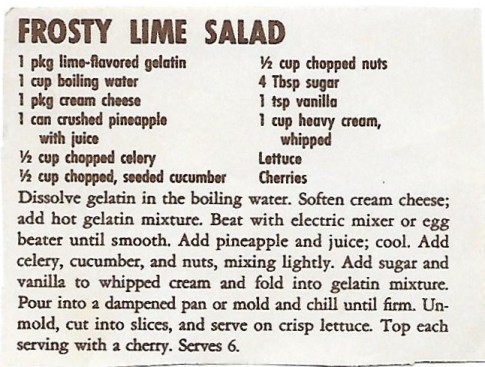 10 Cents Worth of Dates
Blog at WordPress.com.
Loading Comments...