Since I know everyone loves when I do my true confessions, the big reason I decided to make the Seaside Candy roll is because it was on the same page as the Crispy Spicy Cookies and the Easy Divinity. As I was making it, I realized how much my friend’s mom would like it.  When I was done making it and firmly into the tasting phase, I realized that it was very much like something you would find for sale at Cracker Barrel.  (My husband’s family’s natural habitat).  For some people it probably does bring back memories of vacations in those beach towns on the East Coast.  I’ve never been, so I don’t know.  There is something sort of Christmassy about it, though.  Pecans and maple and sweetness.

This is one of those candies that requires no heat.  If you are going to use your handy Kitchen Aid, you want to use the paddle attachment until everything comes together.  At that point you can switch to the bread hook to knead the candy. 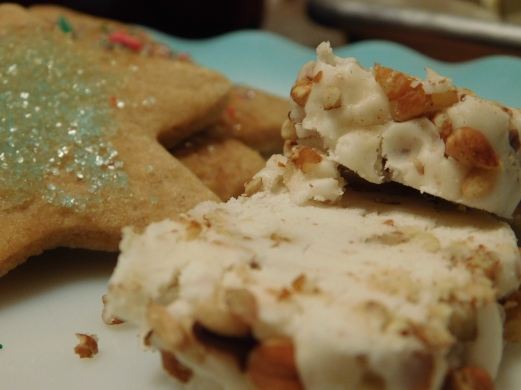 We had friends over to help decorate the Crispy Spicy Cookies.  My darling, patient husband led a 3 year old, 4 year old, and 6 year old in the process while I was out Christmas shopping.  I’m only kind of sorry that I missed it.  I walked in to the house to see little hands putting the lightly spiced cookies into open mouths.  The flavors are gingerbread without molasses.  We had a minor issue while making cookies.  Someone didn’t really understand the directions and didn’t know to cream the butter and sugar before adding the dry ingredients.  It dried the mixture out a lot.  We ended up adding a bit of liquid to loosen things up a bit.  I don’t think it affected the flavor.

Christmas isn’t Christmas without something like gingerbread.  My son is describing gingerbread as “that soft, sweet, spicy deliciousness that tickles the back of your throat.”  I keep telling him that I’m not writing about gingerbread right now, but it doesn’t stop him from telling me.

That’s what these cookies are like.  Snuggling with your oldest on the couch, with a Hallmark Christmas movie on, and the tree lit.  The smell of cookies in the air and the sound of your middle child reading a bedtime story to his younger sister.  Just light perfection.

Around here, Christmas means eggnog. As soon as it starts appearing in stores, the kids start asking for it.  I make it a point to never buy it before December (and I know, I know, I could just make it, I even have a few different recipes for it).  But there is something about that thick, rich, creamy nog all scented with nutmeg.  It finds its way into my morning coffee.  (Not the Martha Stewart version, but there are times where that might be nice.)  Someone just told me about eggnog bread.  Who was that?

I swear I am not just rambling about eggnog, I actually have a point.  Nutmeg cookie rolls.  YUM.  A nice little stick of a cookie with rum and nutmeg flavors.  I was hoping that this recipe would be nutmeg-y enough to be a suitable replacement for the drink and thus save me some room in the refrigerator.  The verdict is that it’s just not quite creamy enough.  These cookies are crisp and sweet.  The nutmeg is sort of a warm afterthought.  You can smell it as you bite into them, but it’s not the first flavor in your mouth.  I decorated these with melted white chocolate and some red things to make them look festive.  I think they kind of look like matches.  Whatever. 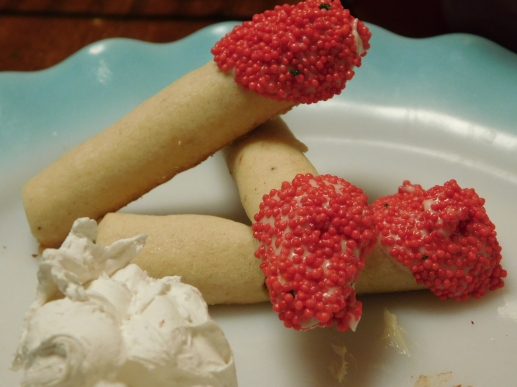 Now, divinity.  I’m sure if you read through cookbooks the way I do, you have seen recipes for divinity, but you may not know what it is.  Imagine if meringue cookies and marshmallow fluff had a baby.  Divinity is light fluffy clouds of vanilla flavor.  They have a bit of a brittleness about them like the crunch of your feet on grass after the first frost.  But instead of being cold, it’s warm and gentle.  It’s not exactly sticky, but it’s kind of got the memory of being sticky.  Nuts are optional here.  I figured I had enough nutty things on my cookie tray and more would just make it unbalanced.

Ok, so if you’ve made it through making butterscotch and anise candy, you may already know that making candy can be hard.  Molten sugar is HOT! And sticky.  And it will burn the crap out of you if you let it touch your skin.  Cold water will harden the candy and help with the burn, but you need to act quickly.  Anything that is over 200 degrees is going to hurt.  Sticky things are worse.  BE CAREFUL when pouring the hot syrup into the egg whites.  Pouring slowly will lessen the chances of hot liquid splattering up at you.  Scrape down the sides as necessary.  When it is time to spoon out the warm candy, work quickly.  It gets harder to scoop as it cools.

Growing up we went to a church that had a phenomenal Christmas bazaar every year.  There were certain things that could not be missed.  In the tearoom, you could sit and drink hot cider and eat a selection of Christmas cookies and cream puffs stuffed with chicken salad.  There were the baked beans.  Sadly that recipe didn’t make it into the church cookbook.  I’ve been attempted to recreate the beans.  My mom had the recipe at one point, but it might’ve gotten lost in a move.  The beans were that good.

You could tell it was time for the bazaar weeks ahead of time.  The familiar fragrances of the church, the incense, Murphy’s oil soap, old wood, and beeswax, would start to become entwined with the smell of sugar and anise.

At the bazaar, a cut glass punch bowl would be piled high with baggies full of jewel-like red and green candies.  My siblings and I would always make sure that my mom bought at least one bag.  There were a few years where I would bring my own money to secure my own bag.  Anise is one of those flavors that not everyone likes.  I get it.  But it takes me back to those days of helping in the tearoom, exploring all the goodies, conversations in the kitchen with the “old” church ladies.  And the color is so pretty and this anise flavor isn’t very strong. It’s more of the suggestion of anise than a powerful anise flavor.

Since those days I have helped 2 churches start their Christmas bazaars.  One turned into an event with a fancy wine and cheese night and silent auction.  The other is an amalgamation of sewn crafts, canned food, lefsa, fresh bread, herb butters.  I was the official bread maker for years.

Ok, enough of the sentimental drivel and let’s get to cookies.

Chocolate, cherries, coconut.  They are soft and chewy and vaguely taste like the cherry cordials that my husband insists on every year, but grown up and better.  I considered breaking into my stash of brandied cherries that I made earlier this summer to experiment with, but realized that these cookies should be more child friendly. (Which is the same reason I didn’t put brandied apples in my apple pie, although that was tempting also.)  The recipe does not call for any decoration or frosting, but I had melted chocolate leftover from decorating the Real Orange cookies and thought it might look pretty and add a touch of class to the chunky brown cookies.  They provide a nice foundation to my cookie plates and create a nice balance of flavors and textures.  (And aren’t they pretty?)

In which I share the first day of Christmas treats.

In the winter, it’s very important to get your vitamin C.  You don’t want scurvy.

These real orange cookies are nothing short of amazing.  They have a bright sunshiny flavor.  They are crisper than I expected them to be, but in a welcome way.  We decided to dress them up with a drizzle of white and dark chocolate. (Apologies to those friends who got plates before these were decorated.  You are welcome to come over and get the decorated ones)

Butterscotch is my grandma’s favorite candy.  In honor of her, I made this recipe. I tried coating it in some cornstarch and powdered sugar to keep it from sticking, but it clumped up and sort of looks terrible.  It doesn’t affect the taste.  The edges of it are very brittle, but the middle feels like the brown sugar didn’t dissolve all the way.  But it doesn’t really matter.  This is my husband’s top pick of candy.  (Don’t tell him he’s like my grandma.)

Seriously, look at the orange rind in that cookie.  Don’t you just want to take a bite?

In which I exhibit some garden art.

For a long time I sucked at making Rice Krispie Treats.  It wasn’t that I couldn’t melt the marshmallows and butter, it wasn’t that I couldn’t stir everything together, it was always putting those suckers in the pan that defeated me.  I felt incompetent in a way that was ridiculous.  I could make gorgeous loaves of bread, I could cook gourmet meals, but the humble Rice Krispie Treat defeated me.  And, yeah, I could go buy a box of them, but they just don’t really taste the same, do they?  And then the variations, the Scotcheroos, the cornflake treats that we would get on our platters of Christmas cookies…I loved them all, but I sucked at making them.

I finally figured a few things out and got better at making them, but the stupid green cornflake wreaths still defeat me.  I usually just make those into bars and then add a ton of sprinkles.  They are delicious, even if they aren’t what I originally intended to make.

Anyway, all of this is to say that when approaching a recipe involving Rice Krispies, I get still get a bit of the old anxiety.  It’s stupid and I know it.

The recipe is a little unclear as to what is supposed to happen with these cookies after everything is mixed together.  I decided to make balls, it wasn’t a great choice because when they were cold, they were hard to bite into.  I think we all had damage to the roofs of our mouths because of them.  That didn’t deter us from eating them or even making a variation of the recipe soon after.  The variation just got pressed into a pan and cut into squares.

Ah, so now you are wondering what sort of variation I did.  Of course.  I used pretzels instead of the cereal.  I added toffee pieces.  It was exactly the sort of snack I needed and I may not have done a lot of sharing.

Because this recipe just looks like a ball of beige, I decided to take some outdoor pictures featuring some of my garden art.  Enjoy.

Join 333 other subscribers
10 Cents Worth of Dates
Blog at WordPress.com.
Loading Comments...