In which I want to know “Who wants to know?”

The recipe opens with the line “Son Jimmy’s favorite pork dish.” It’s things like this that prick my imagination.  Who was Jimmy?

I can’t quite imagine Jimmy Ray eating a pork chop topped with apples, maraschino cherries, and brown sugar.  But I have a feeling that the Jimmy that these pork chops were named after was a Groovy Teen.  How could he not be?

I originally made this recipe in the fall when my apples were ripe.  If you don’t know about my apple trees, you can find out more about them here and here.  I made so many apple recipes at the time, but figured that you may not want to read about nothing but apples, so backlogged this one. 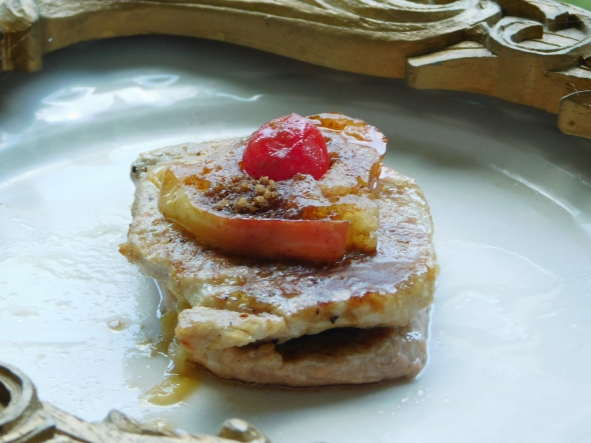 The pork for this recipe came from the sale bin.  I love seeing what is in the reduced meat section of the grocery store.  Sometimes there are things like beef shanks or pork neck bones.  I love to get those cuts of meat and slowly cook them until they fall off the bone and have made magical gravy to serve over mashed potatoes.  Usually I’ll throw some garlic in there to roast.  That either gets incorporated into the sauce or spread on homemade bread.

None of which is relevant to this recipe.  I only brought it up because I did not have 3/4 inch pork chops.  I had tiny little thin cut pork chops because they were on sale. 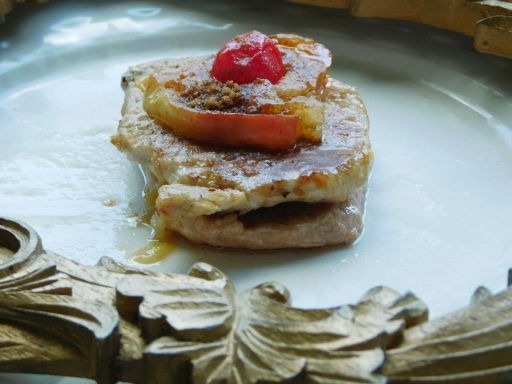 That part is important because thin pork chops cook much quicker than thick cut pork chops.  Which means that they can overcook quickly if you aren’t watching them.  Nobody likes a dry pork chop.  To try to mimic the effect of the thicker pork chops, I sandwiched an apple slice between layers of pork.  I feel like they were still a little dry, but not too bad.  It wasn’t quite that experience of biting into a nicely marbled pork chop on the bone where the fatty edge is just sort of melting into the rest of the meat.  (And all the vegetarians that are accidentally reading this are cringing).

This is a solid meat and potatoes sort of dish.  It’s sweeter than I like an entree to be, but not so sweet you feel like you need insulin.

Speaking of potatoes…I ran into Target while my husband stayed in the car with the kids (one of whom needed a nap like you wouldn’t believe).  While he waited he read an article of genius facts or something like that.  When I got back in, he attempted to impress me with the fact that everything in the world could be labelled as a potato or not a potato.  Of course I started brilliantly discussing how not everything we label as a potato is actually a potato and yams and sweet potatoes are not the same thing.  Then I asked “Would it be a better classification if we labelled everything as “tuber or not tuber?”  To which my clever husband replied “That is the question.”  I retorted that that wasn’t funny, as I laughed and he snort-laughed next to me.  We never fail to amuse ourselves.  (If you don’t get why this was not funny, review Hamlet).

And don’t serve sweet potatoes as a side dish for this meat.  It’s just too much sweetness.