In which we all sit around and eat fruit pie together. 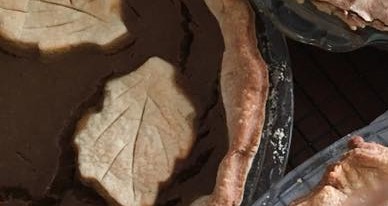 It was Thanksgiving a long, long time ago.

There was the Thanksgiving where my brother-in-law’s friend discovered the song “Alice’s Restaurant.”  I think every time he opened his mouth for that visit, the first word that came out was “Kid…”.  If you know the song, you’ll know how this was said.  If you don’t, I suggest looking it up.

There was the Thanksgiving when my brother’s brought a friend home from college.  Throughout the meal, he was very quiet until we got dessert.  Suddenly, in a loud voice he exclaimed “This is really nice…(pause).  All of us sitting around…(pause).  Eating fruit pie together.” It was so unexpected and prompted questions about whether or not this was normal.  For us, it most definitely was. 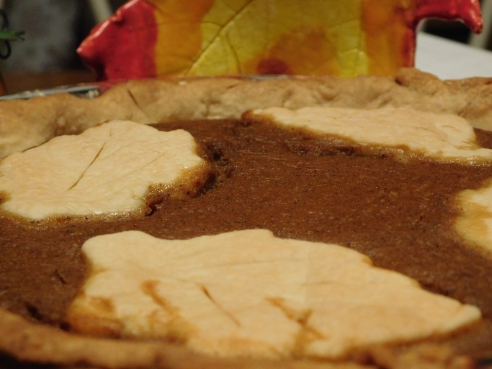 For me, Thanksgiving has always been a pie holiday.  Sure, there may be other desserts, but they don’t count the same way pie does.  March 14th seems like less of a pie holiday than Thanksgiving.  It’s tradition to leave the table, stomach groaning only to be lured back by someone bringing out the pie.

In my family, we always used fresh whipped cream to top the pie.  Lightly sweetened, perhaps with some vanilla in it, sometimes a little spiked.

It took a me a long time to appreciate pumpkin pie.  It always smelled so good and I loved all the flavors (despite my rant against pumpkin pie spice when it was apple season), but the texture was never my thing.  It was too soft, too slimy, too spongy, something.  I knew that I was bucking tradition by not eating it, but my mom made such wonderful other pies.  I have fond memories of a black bottomed pecan pie.

Had I not had a kid that loves pumpkin pie more than anything, I might’ve continued to have my pie holiday not including the classic.  Since being a mom I’ve made at least one pumpkin pie a year, it’s always been eaten.  There came a time when I couldn’t resist the smells and I started to take just one bite of someone else’s pie because I just needed those flavors in my mouth.  I’m now up to eating a whole small slice by myself.

This recipe for pumpkin pie is my go to.  I found it in my great-grandma’s box of recipes and included it in the book I made for my grandma.  It makes a heavily spiced thin pie filling.

(Because a list of ingredients isn’t an actual recipe for most people, mix all of the ingredients together, add about a cup and a half of milk. Pour the filling into a pie crust and bake at around 375 for about 50 minutes or until set.)

One thought on “Pumpkin Pie”