In which I compare cottage cheese to the Captain and Tennille.

Last night as I was driving home in the rain, Casey Kasem was counting down the top 40 hits from 1976.  I can sing along with most of Saturday at the 70’s, but there are songs that baffle me as to how they even got popular.  As I was pulling up to the house, Captain and Tennille started crooning “Muskrat Love“.  How did that become a hit?  It’s worse than “Angie Baby“. I guess some things just make sense at the time, even if they lose relevance as the years go past.  Kind of like Peach Cottage Cheese Loaf. 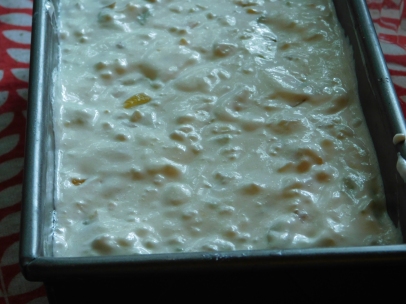 Now you have to understand, there is only one person at my house that likes cottage cheese, so we were already prejudiced against this recipe.  Then we are going to add in some mayonnaise and gelatin…How could this not be a winning dish?

I had to look up what “creamed cottage cheese” was.  Basically, it’s the cottage cheese anyone can get at any grocery store in the US.  It has liquid in it as opposed to being dry.  It’s so common, they don’t label it that way and you’d probably have to go to a specialty store to find non-creamed cottage cheese.  (Or make it yourself).

This recipe did not “loaf”.  I don’t know where I went wrong in following the directions, but the gelatin did not hold this recipe into a discernible loaf.  I managed to get it to hold together long enough for pictures, but the neat slices I imagined didn’t happen.  The whole thing got scraped into a bowl and served that way.

Everyone was required to take a taste of the vomit-like concoction because that’s the way we do things.  We try ingredients we don’t like in a variety of ways in case there is a way that we do like that ingredient.  It worked with beets, mustard, brussel sprouts, and other things.  The rule at our house is if you say you don’t like it without trying it, you need to eat twice as much as I would normally expect you to eat to try something.  We aren’t talking huge amounts here.  It’s not like I make anyone eat a double full portion, it’s more like 2 teaspoons full instead of 1 teaspoon full.  The kids prefer to have control over their serving sizes, so they agree to the terms.  It works for us and lessens the amount of whining at the table.

As we expected before we started the meal.  No one really cared for this marvelous creation.  Even the person that “liked” it couldn’t really eat more than a couple of servings over the course of a week.

This recipe, like “Muskrat Love”, should probably stay back in the time period from whence it came.  It’s sometimes better to just leave things in the past.  But if you insist on doing things your own way, maybe you should try the pineapple variation. 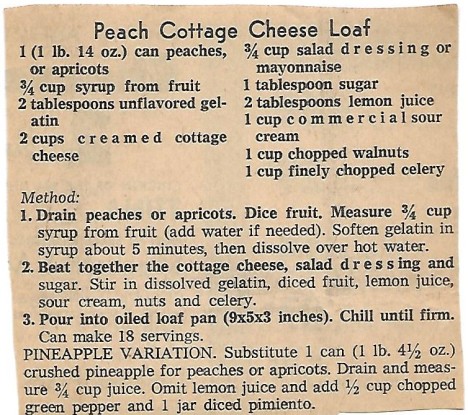