In which I finally get around to posting a recipe with dates in it.

Finally I am posting a recipe that includes the dates that the blog was named after.  (See About Page for further details).  It seems to me that dates have fallen out of favor as a normal ingredient except in things like energy bites.  I have so many “new” recipes that call for them, that I was excited to see a large resealable bag of them at Costco.  I have to be careful with dates since there are dried dates that are rolled in oat flour to prevent them from sticking.

Quick breads are great.  They are easy to make, they are easy to store.  They are delicious warmed up with butter, spread with jam, spread with cream cheese.  My kids eat them, but only if I’ve sliced the loaf for them.  John pointed out that it’s because without being sliced, he feels like the bread might have another purpose.  Then went on to say something about “It’s the greatest thing since sliced bread because when the bread is sliced you know you can eat it.” Maybe I just need to start leaving “Eat Me” signs around my kitchen like in Alice in Wonderland?

But the thing is, I get caught in the banana bread/pumpkin bread/zucchini bread loop.  There are so many other great quick breads out there.  Most of them can be made into either loaves or muffins.  Cooking time needs to be adjusted when changing pan sizes, of course. If I am deviating from the size pan specified by the recipe (usually from larger to smaller), I set the timer for the oven for 20 minutes and evaluate from that point, either with a toothpick/cake tester, or by sight as to how much more time is needed for a proper bake.   I used mini loaf pans and I think we got 3 loaves.  I have the other ones in my freezer.  They took about 45 minutes to bake. 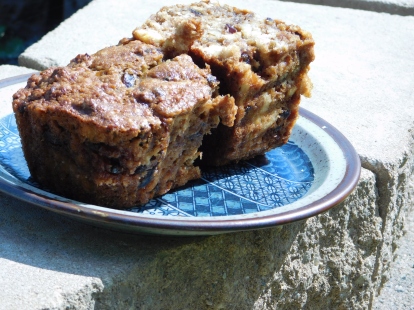 Appropriately the dates for this recipe came from my grandma’s house when we moved her a year ago.  They have been sitting in my freezer just waiting (along with fruit for fruitcakes, but that’ll be closer to Christmas).  The applesauce I used for this came from my apple trees.  It’s not heavily sweetened and was flavored with cinnamon, but not a lot.  It’s very much a personal preference or what you have on hand sort of thing.  You do not need to make your own applesauce for this recipe.  However, if you decide to, making applesauce is not complicated.

A couple of other things about this bread.  It is very dense and very moist.  Toast the nuts before using them.  It makes a difference.  This is another one of those recipes where whole wheat flour can be used in place of white flour.

And really, isn’t this a lovely loaf? 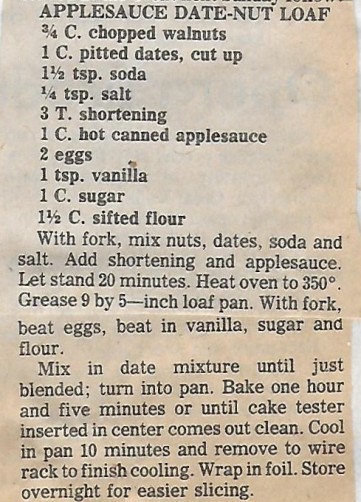