In which I explain child development to a child

I came home to tears and explanations.

I had gotten up early that morning and prepped French Apple Coffee Cake while I drank my first cup of coffee. I got it baking while I got my shower and got ready to go.   As I was leaving, I told the kids to go ahead and eat as much as they wanted from one of the coffee cakes (the recipe makes 2) and to leave the other because I still needed to get some photos.  They agreed and I left the house for my job interview feeling a little confident and a little smug because I had accomplished so much already.

It must’ve helped because I think the interview went really well.  But when I got home and opened the door I was met with two children.  One of whom was crying, the other of whom was trying to explain.

“She’s crying because she wanted a WHOLE coffee cake to herself and I told her ‘No’.”

I picked up my crying daughter and put my hand on my son and walked into the kitchen.  One of the coffee cakes was completely gone except a small pile of apples in the bottom of the pan.  The other, as I had requested, was untouched.

“It was delicious, but…” and he launched into another tirade about how his sister is selfish and doesn’t understand things.  I listened and tried to patiently explain AGAIN how it’s all developmental and has nothing to do with anything other than how little kids are.

After I got pictures of the other coffee cake, it sat until the next morning so that John could have some for breakfast.  It didn’t even take 24 hours for both coffee cakes to be eaten.

I have no idea why this coffee cake is considered French.  Can someone explain?

I made a small substitute in the recipe.  I ran out of butter so I replaced the butter in the icing recipe with cream cheese.  I recommend you do this also.  The slight bite of the cream cheese works well with the tartness of the apples.  From the quick devouring of the cake, I think everyone else agrees. 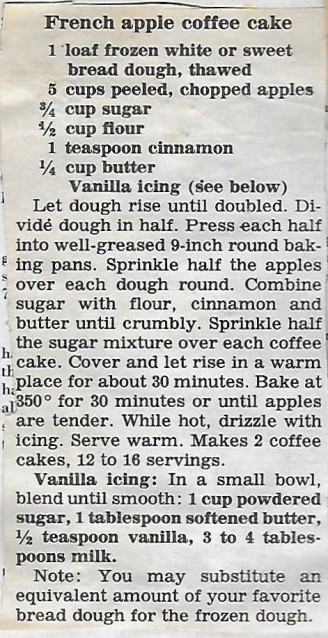